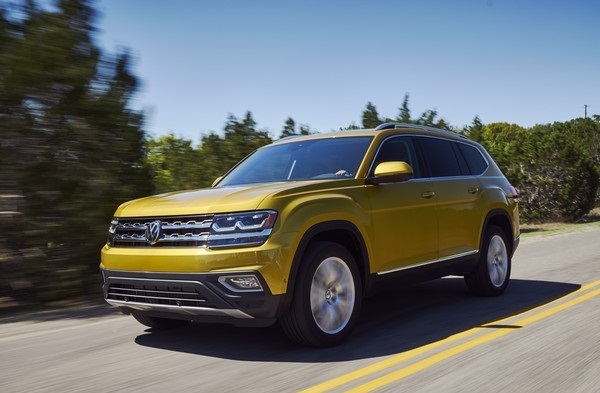 By admin • Nov 15, 2017 • No comments
0 shares
Volkswagen is looking to put the issues of the past in its rearview mirror so to speak and look toward the future. They have many things in the works and putting themselves in a much better light in the eyes of the driving public is the best way to start. As everyone knows the SUV, crossover and even the minivans are still one of the hottest segments in the automobile market, especially for the larger families.

Let’s face it, no one wants to try to cram their family of 6 or even 7 into a small sized sedan or even small crossover. This is one of the reasons why automakers are still producing models of their vehicles with a 3rd row of seats. Volkswagen want’s the car buying public that they are listening and they their own vehicle that fits the bill; the 2018 Volkswagen Atlas 3.6L VR6 4Motion.

While its competition like the Pilot from Honda, Highlander from Toyota and Explorer from Ford has been around for years, the Atlas from Volkswagen is not just another cramped SUV with the 3rd row of seats shoehorned into the same small space. Volkswagen paid extra close attention to feel of the cabin of the 2018 Atlas 3.6L VR6 so that each and every passenger doesn’t feel like a sardine.

The new Atlas gives Volkswagen something that it didn’t have in any of its SUV models, that much-needed 3rd row of seats. The Atlas features a longer wheelbase than its Touareg SUV, which doesn’t offer to seat for 7 people.

Volkswagen didn’t scrimp on the inside of the new Atlas 3.6L VR6 4Motion, they wanted to be sure that everyone knew that it was every bit of a luxury ride that they come to expect from Volkswagen over the years. You will find numerous comforts inside the Atlas like softer materials on the seats, side panels with highly attractive metal and high-polished wood accents.

The engineers at Volkswagen paid close attention to the passengers in the 3rd row by ensuring that they feel comfortable, even for those rather tall individuals. They included a much lower entry step and grab handles for an easier entrance into the 3rd row of seating. The second row of seats are highly adjustable and can be moved forward more than 7 inches to assist in loading the 3rd row of seating.

Power to the wheels

Volkswagen decided to put a number of engine/transmission options into the Atlas so that it appealed to the wider audience. You can get one with an impressive 275-horsepower 3.6L V6 with an 8-speed automatic transmission or you can choose a 235-horsepower 2.0L turbocharged 4 cylinder which matches the torque of the V6. The 4Motion refers to the all-wheel-drive system that puts power to all four wheels for when the extra traction is needed the most.

While the base model will look fairly normal for the driver and front seat passenger with the usual navigation system and typical instrument clusters. They have something much cooler in store for the more adventurous, the top of the line SEL version comes with a unique 12.3″ fully digital dashboard display with a number of fully customizable display options.

It also includes a number of other fully digital controlled features like the radio and climate controls that are all at the fingertips of the driver of the SEL version of the 2018 Atlas 3.6L VR6 4Motion.

If you want to see more, check out your local Volkswagen dealer and take a test drive for yourself.